Finishing Well: What I Learned From Ernie Harwell

“When people talk, listen completely. Most people never listen.”  — Ernest Hemingway About 15 years ago, I started interviewing leaders who seemed to be “finishing well” in life. To date, I have interviewed over 100 leaders.Folks like Ernie Harwell, the iconic “voice of the Detroit Tigers” for 40 years of broadcasting. General Chuck Krulak, head of Armed Forces under President Clinton. Archie Dunham, CEO of Chairman of Conoco-Philips. And one of my heroes, Coach John Wooden, who still holds the record for the most NCAA National Basketball championships (10 over 12 years).These, and many more–most not “famous” as these, but just as wise and insightful and successful. Over the next half dozen blog posts, I’ll share some of what I learned.In most of the interviews, I started to recognize something that surprised me: I felt really “listened to.” In other words, my questions mattered to the person I was interviewing. On the surface, it appeared like immense graciousness on their part to give me some time to ask a few questions, explore some of their story. But it was more than that.Ernie Harwell probably most of all.“So, my friend, what would you like to know?”Ernie’s rich voice asks earnestly.“First of all, thank you for taking the time–”  He interrupts me…“It’s really no problem. In fact, I am delighted to talk with you today, Marc.”“Well then, Mr. Harwell, did you always know that you would be a radio and TV announcer, way back when you were a young boy?” 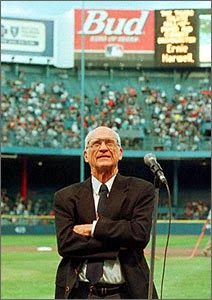 And off we went, discussing the lisp he had as a young boy, how his mother gave him the belief in himself to overcome obstacles, how it really was a kind of miracle. Through the entire conversation, he returned again and again to me, to connect his experience with the questions I was asking and the discoveries I was seeking through our conversation.It turns out there is a term for this ability in leaders to connect with people like I experienced. Empathy– technically “the capacity to recognize and vicariously experience the emotions of others.” Simply, it’s caring for others so closely that you identify with them.And, it also turns out it’s key for successful leadership. I might say it’s key for a successful LIFE.Probably more than any other behavior, listening to a person— reallylistening–is one of the clearest indicators of empathy.Hemingway’s words are true; few of us really listen. We think about the next thing we are going to say. We look over the shoulder of the person who is talking to us, seeing who else is in the room. We go through a mental checklist of what we have to get done, the person’s voice fading in and out of the voices in our mind.As a result of what these 100+ leaders taught me about listening, at least once a month I try to ask the people that I lead and my peers one open-ended question that is not “work related.” Here are a few of the questions I have asked:

You get the idea. I have tried to learn to listen for when a person’s voice becomes animated, they begin to talk with their hands, they lean forward as they talk. These are cues to what this person is most passionate about. Always, there is so much to listen for.In fact, it’s been amazing what I have learned about my friends and colleagues over the years–especially when I really listen to them.Who will you listen to today?